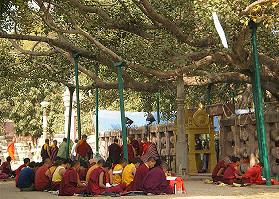 Bodhi, a Pàëi word meaning `awaken', is the name given to the particular tree growing at Bodh Gayà which the Buddha was sitting under when he became enlightened. This  tree was a variety of fig known to botanists as Ficus religiosa and which has large spreading branches and rounded leaves with a characteristic pointed tip. In the several accounts of the Buddha's enlightenment in the Tipiñaka, the Bodhi Tree is only mentioned twice (D,II,4 and Ud.1, repeated at Vin.I,1-7). Tradition says that after his enlightenment, the Buddha stood for seven days gazing at the  tree out of gratitude for the shelter it had given him (Ja.I,77), and modern Buddhists still revere this species of tree for the same reason.

The present Bodhi Tree at Bodh Gayà was planted in 1880 and is distantly related to the original one. Bodhi trees are sometimes mistakenly called banyans although the banyan is a different species of tree altogether.