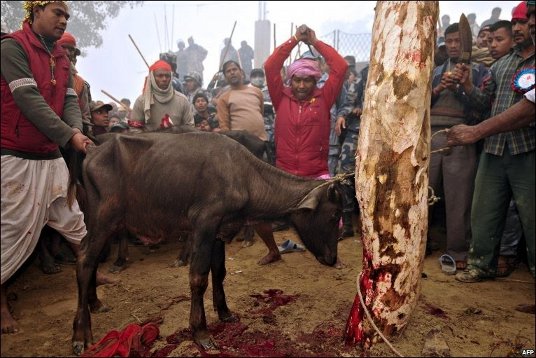 One of the central rites of Brahmanism during the Buddha's time was the sacrifice (yàga)  which sometimes included the slaughter of animals. The Vedas describe in detail how these sacrifices should be conducted if the gods were to find them acceptable.  Some of these rites could be very elaborate and very expensive. The Tipiñaka records one sacrifice conducted by a brahmin named Uggatasarãra during which `five hundred bulls, five hundred steers and numerous heifers, goats and rams were brought to the sacrificial post for slaughter' (A.IV,41). The Buddha criticized these bloody rituals as being cruel wasteful and ineffective (A.II,42). He maintained that those who conduct sacrifices make negative kamma for themselves even before they have set up the sacrificial post, ignited the sacred fire and given instructions for the animals to be slaughtered (A.IV,42). He repudiated the killing of the animals, the felling of trees to make the sacrificial posts and the threatening and beating of the slaves as they were driven to do the preparations `with tear-stained faces' (A.II,207-8). He also made a plea for such sacrifices to be replaced by charity towards virtuous ascetics and monks (D.I,144).

In 257 BCE King Asoka issues an edict saying that `for many hundreds of years the killing and harming of living beings has been done' but that it is now to cease. This almost certainly refers to the king's determination to ban Vedic sacrifices, despite their ancient origins. In time the Buddhist critique of animal sacrifice led to them being phased out within Brahmanism. Ghee, grain, milk or honey was thrown into the sacred fire as a substitute for the slaughtered animals. As Hinduism evolved it adopted harmlessness (ahiüsà) as one of its most important moral principles, although some Hindu sects continue to practice animal sacrifice even today.

that there is a Buddhist equivalent to the Jewish and Christian Sabbath? Click Here