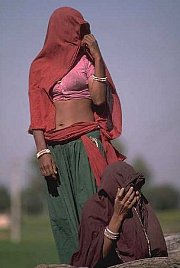 A veil (chadda or oguõthikà) is a piece of cloth used as a covering. Some religions and cultures require women to veil themselves in public, considering it to be a sign of modesty. The Bible says women should veil themselves while in church (1 Corinthians 1, 4-16) and the sheer veil Western brides wear during their wedding is a leftover of this practice. When diplomats visit the Pope in the Vatican their wives must veil themselves.  In most Islamic cultures women must wear a veil to cover their hair or sometimes even their whole face when in public.

At the time of the Buddha some women wore a veil although more as an equivalent to a hat than to conceal the face. But by around the beginning of the first millennium it was starting to be considered appropriate for upper-class women and those in royal households to veil their faces. This was the beginning of what is called purdah, the exclusion of women from public life, a trend that became more widespread in India with the introduction of Islam in the 13th century.

The Lalitavistara, a fanciful biography of the Buddha, has an interesting story pertaining to the issue of female veiling. According to this work, after Yasodhara was selected to become Prince Siddhattha's wife, people criticized her for not veiling herself in the presence of her father-in-law and mother-in-law. This was taken to be a sign of immodesty and willfulness. The Lalitavistara depicts the young women defending herself in these words.  `Those who are restrained in body and behaviour, measured in speech, with senses controlled, calm and at peace, why should they veil their faces? Even if covered with a thousand veils, if they are shameless and immodest, dishonest and devoid of virtue, they live in this world uncovered and exposed. Even without being veiled if  their senses and their minds are well-guarded, they are faithful to one husband, never thinking of another, they shine like the sun and the moon. So why should they veil their faces? The sage reading the minds of others knows my intentions as do the gods know my conduct and virtue, my discipline and my modesty. Therefore why should I veil my face?'

Although this story is apocryphal it is in harmony with the Buddha's idea that the psychological and the internal are more important than the material and the external.