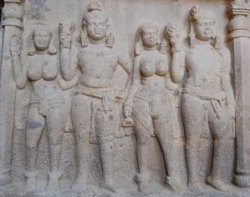 Clothes (cela or vattha) are pieces of fabric tailored to fit over the body and worn to protect it from the elements and for the sake of modesty. In ancient India cloth was made out of cotton, wool, silk or various plant fibres. The most expensive cloth was the brocade of Kàsi and Kadumbara linen (A.I,248; Ja.VI,500). The Buddha mentioned that when he was a prince his turban (veñhana), jacket (ka¤cuka), undergarments (nivàsana) and robe (uttaràsaïga) were made only of Kàsi brocade (A.I,145). Men and women wore loin cloths around their waists and a long strip of cloth wrapped in various ways around their upper bodies, and sometimes a jacket. Both sexes wore underpants which resembled the modern thong (kañisuttaka or kopãna). Men wore turbans and women veils over their heads. There were no buttons; pieces of cloth were knotted together. There were no pockets either; small articles were knotted into a corner of a garment.

The Buddha wore a yellow or tawny-coloured robe and stipulated that his monks and nuns should do the same. There is no record of him advocating that his lay followers wear any particular type of clothing, but they are often referred to as `lay disciples dressed in white' (odàtavasana, D.I,211; M.I,340). It seems that from the time of the Buddha himself, lay Buddhists favored clothing made out of plain undyed fabric and this would have only been appropriate. Such clothes would symbolise purity and simplicity and also emphasize the equality between Buddhists by diminishing the distinction between rich and poor. In Sri Lanka very devout people still prefer to wear white. In Sri Lanka and in Thailand also, those observing the eight or ten Precepts during the uposatha often wear white clothes.

However, the most important thing is not what type of clothes one wears or their colour, but the quality of one's heart. The Buddha said: `Even though being finely adorned, if one is peaceful, restrained, committed to the holy life and harmless towards all beings, he is a true ascetic, a true brahmin, a true monk' (Dhp.142). See Nudity.

that the Buddha always sat facing the east or lay down to sleep with his head to the east? Click Here