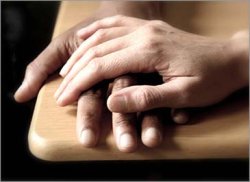 Compassion (karuõà) is the ability to feel the distress or pain of others as if it were one's own. The English word compassion has exactly the same meaning as the Pàëi and comes from the Latin com meaning `with' and passio meaning `suffering'. Sometimes in Buddhist psychology, compassion is also referred to as empathy (anuddyatà), commiseration (dayà), fellow feeling (anuggaha) or sympathy (anukampà).

The Buddha encouraged his disciples to sometimes sit in silence, arouse thoughts and feelings of compassion, and then mentally radiate them to the whole world. Someone who did this, he said, could be called `compassion-imbued' (karuõàdhimutta). `This means one abides suffusing one quarter of the world with a mind filled with compassion, then a second, a third and a fourth. Thus one abides suffusing the whole world, up, down, across, everywhere and all around, with a mind filled with an abundant and exalted compassion that is freed from anger and ill-will'(D.II,243).

Compassion is the second of the four Brahma Vihàras and was more highly praised by the Buddha than any other virtue because it is the root of so many other virtues.

The Jàtakamàlà says: `Compassion gives birth to all the other virtues just as cooling rain makes the crops grow. When a person is compassionate he has no desire to harm his neighbour, his body, speech and mind are purified, concern for his neighbour's welfare increases and states like kindness, patience, happiness and good reputation grow. Being calm, the compassionate person does not arouse fear in the minds of others, he is trusted like a kinsman, he is not agitated by the passions, and quenched by the waters of compassion, the fire of hatred does not blaze in his heart. Remembering this, strive to develop compassion towards others, as if they were yourself or your offspring.'

that T. S. Eliot’s The Waste Land draws on elements from one of the Buddha’s first sermons? Click Here