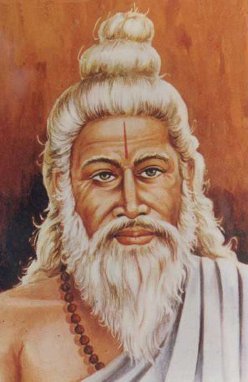 The coiffeur's art was very sophisticated by the Buddha's time and both men and women paid a great deal of attention to their hair. Women favored parting their hair in the middle, wearing plaits (veõi, Ja.II,185) and applying sandal oil to it both to perfume it and to make it glisten (Ja.V,156). The courtesan Ambapàlã used to wear her glossy-black hair curled at the ends, with flowers in it, well-parted with a comb, decorated with gold ornaments and adorned with plaits (Thi.252-5). When Nanda left to become a monk, he looked back and saw his girlfriend with her hair half-combed, an image that later he couldn't get out of his mind (Ud.22). For men, sikhàbandha consisted of twisting long hair and a long cloth together and then tying it around the head into a turban (D.I,7). Boys would wear five topknots or buns called cålaka (Ja.V,250) and women would sometimes have a jeweled diadem attached to their hair  (Ja.I,65). Buns on the back, top or the side of the head were also popular. Bees' wax and sometimes banyan tree sap was applied to slick the hair down (Vin.II,207) Men trimmed their beards, wore them long, grew goatees (goëomikam kàràpenti), and shaped them into four points. They would also pluck out grey hairs to disguise the fact that they were getting old (Vin.II,134). Some ascetics wore dreadlocks (jañà), i.e. the hair matted into long braids and allowed to either hang down or be tied together into various shapes. When the braids were tied into a bun on the top of the head it was called jañaõóuva (S.I,117). Some ascetics wore topknots while others shaved their heads or pulled their hair out (D.I,167). Brahmins probably shaved their heads except for a small part at the back which was left to keep growing, as  is still done today.

The Buddha asked his monks to keep their heads and faces shaved and nuns to keep their heads shaved, probably for hygienic reasons and to discourage vanity (Vin.II,207). Nuns were expected to shave their underarm and pubic hair which was a sign of respectability in women (Vin.IV,260). Monks were also asked to cut the hair in their noses if it got too long so as to avoid having a curious or unpleasant appearance (Vin.II,134). See Shaving.