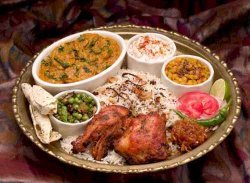 Food (àhàra or anna) is material nutriment ingested by organisms to satisfy the pangs of hunger and to sustain the body. In ancient India food was classified as either hard or soft (S.I,162) and could be consumed by being either eaten, drunk, chewed or sucked (Pj.I,207).  The Buddha rejected the concept of pure or impure food and thus Buddhism has no food taboos, although there are some restrictions for monks and nuns but only for practical reasons. However, he did praise moderation in eating (Sn.707) and encouraged this in his monks and nuns. To this end and for reasons of health, he made a rule that they should not eat after noon: `I do not eat in the evening and thus I am free from illness and affliction and enjoy health, strength and ease'(M.I,473).

While the Buddha usually ate very  simple food or even scraps, when invited to the home of a wealthy supporter for a meal he would eat `fine rice with the black specks removed together with a selection of sauces and curries' (M.II,7). The Saundarànandakàvya   gives this advice concerning food: `For the sake of your meditation and your good health, be measured in your eating. Too much food restricts the breathing, causes sloth and sleepiness and destroys one's energy. Too little food drains the body of its solidity, its healthy color, its energy, its usefulness and its strength.'

Buddhism sees love as being able to add an important dimension to almost anything, even food; preparing it, sharing it with others or even just eating it. The commentary to the Jàtaka says: `There is no taste equal to love. The four sweet things given with indifference are not as tasty as course millet given with love' (Ja.III,142). The Buddha made much the same point when he said: `Fine or course, much or little, one can eat anything made with love. Indeed love is the highest taste'(Ja.III,145).

The Buddha suggested to his disciples that they recite these words as a reflection before eating: `We will eat in moderation. Reflecting wisely we will not eat for fun, for amusement or for physical attractiveness but only for the maintenance and continuance of this body, for allaying the discomfort of hunger, for assisting in living the holy life and with the thought ßI will end the old desires and not give rise to new ones and thus be healthy, blameless and live in comfortû.'(M.I,273). A longstanding Buddhist tradition says that one should stop eating when another four or five mouthfuls or two or three glasses of water would fill the stomach (Th.983; Vism.33).

The Buddha said that in giving food to a hungry person you give them more than just  material substance, you also give them all the things that food imparts Ý life, beauty, satisfaction, strength and intelligence (A.III,42). The Buddhist epic, Maõimegala, says: `Hunger ruins good birth and destroys all nobility; it destroys the love of learned men for their learning, even though previously they thought it the most valuable thing in life. Hunger takes away all shame and degrades the beauty of the features; it makes men stand with their wives at the door of others. This is the nature of hunger, the source of evil craving, and those who relieve it cannot be praised too highly. Food given to those who already have enough is generosity wasted, but food given to relieve hunger is real generosity. Those who do this will prosper in this world, for in giving food they give life.' See Dieting, Fasting and Vegetarianism.