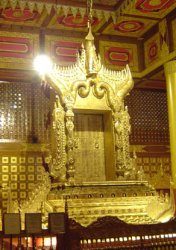 Governance (khattavijjà or pàlanavijjà) is the way a political theory is applied to the administration of a country. The Buddha had little to say on governance or politics but he did urge the kings he sometimes spoke with to be fair, mild and concerned with their subjects' welfare.  The Buddha's teachings to kings was later formulated into The Ten Laws of Governance (dasaràjadhamma). These are generosity (dàna), morality (sãla), liberality (pariccàga), openness (ajjava), gentleness (maddava), self-restraint (tapo), non-anger (akkodha), non-violence (avihiüsà), patience (khantã) and non-competitiveness (avi rodhana, Ja.I,260; III,274).

The longest and most detailed ancient Buddhist teaching on governance is found in the Mahàvastu and is an elaboration of the Tesakuõa Jàtaka from the Jàtaka (Ja.V.109). What follows are some extracts from this work. `A king should never fall into the power of anger. Rather, let him control his anger, for neither a person's interests nor duty thrive when one is angry ... When a dispute arises, he should pay equal attention to both parties, hear the arguments of each and then decide according to what is right. He should not act out of favouritism, hatred, fear or foolishness...While keeping an eye on state affairs, a king should dispense happiness to all. He should prevent all from committing violence and show that it is righteousness which brings reward. As in the days of former kings, large numbers of immigrants came together to be admitted into the realm, so should you admit them. Always show favour to the poor but also protect the rich who are your subjects ... Do not foster hostility towards neighbouring kings. Whoever hates, will be repaid with hatred by his enemies. Cultivate ties of friendship with your neighbours, for others honour those who are steadfast in friendship. Do not talk at great length on all sorts of subjects, but give your judgment at the appropriate time and keep it to the point  Always protect those who live justly. For the wheel of power turns in dependence on the wheel of justice ... Do not appoint as headmen of villages or provinces, even your own sons or brothers, if they are unscrupulous, violent or base ... A foolish or greedy minister is of no value to either ruler or realm. Therefore, appoint as your ministers men who are not greedy but prudent and devoted in counsel and who can guide the realm. Your eyes are not as good as those of an informer, nor is your policy. Therefore, you should employ an informer in all your affairs.'

The essence of this and most later Buddhist political theory is the concept that `the wheel of power turns in dependence on the wheel of justice' (balacakram hi ni÷ràya dharmacakram pravartate), i.e. that power drives it legitimacy from upholding and promoting   fairness, equality and the rule of law.

what the ancient Indians called cigarettes and how they made them? Click Here