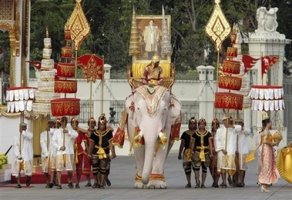 A king (manujinda, narinda or ràjà) is a hereditary male ruler of royal descent. The Buddha defined a king as `the chief of men' (ràjà mukhaü manussànaü, Sn.568). Different religions have different theories about the origins and nature of kingship. The Bible says that all rulers derive their power from God and, thus, to obey the king is to obey God (Romans 13, 1-2). In Europe this doctrine came to be known as `the divine right of kings'. Confucianism taught a similar idea called `the mandate of Heaven' (tianming). According to Shinto, Brahmanism and later Hinduism, kings actually were gods. It naturally followed from all these ideas that a king's legitimacy was not derived from his fitness to rule but from divine assent or approval.

The Buddha had an entirely different and more realistic concept of kings and kingship. In the Agga¤¤a Sutta he posited a social contract theory of monarchy. In ancient days, he said, people saw the need for some form of government and so they elected from amongst themselves a person who they thought would be best able to rule them. According to the Hindu myth, the first king of India was Mahàsammata, a name whose origin the Buddha reinterpreted in support of his idea to mean `elected by the many' (D.III,93; Ja.II,352). Thus according to the Buddhist theory, kings derived their legitimacy from general consent, i.e. from the people they ruled. It followed from this that a king retained his right to rule only for so long as his subjects benefited from it. Several stories in the Jàtaka implicitly suggest that people had a right to overthrow a king who was cruel, unjust or incompetent (Ja.I,326; III,513-14; VI,156).

Such ideas were far too ahead of their time and there is little evidence that they were ever applied. However, the Buddha's teaching of good governance had some influence in making kings more humane. The best example of this is Asoka who was probably being completely genuine when he said: `All subjects are my children. I wish for them what I wish for my own children Ý their welfare and happiness both in this world and the next.'

While the Tipiñaka and later literature always exhort kings to abide by Buddhist values, the general impression they give, almost certainly based on hard experience, is of kings as despotic, arbitrary, self-indulgent and ruthless. `Kings are fickle-minded', `Kings are cruel', `Like a raging fire, kings are dangerous to be near'(Ja.IV,432; V,345; VI,419). Some were described as being `like dust in the eye, like grit in the soup, like a thorn in the heel' (Ja.II,240). When King Milinda asked Nàgasena if they could have a discussion on the Dhamma the latter said: `Sire, I will discuss with you if you do so like a learned person and not like a king.' Milinda asked what the difference was between these two approaches and Nàgasena replied: `When the learned are discussing, beliefs are overturned, theories are unravelled, assertions are refuted, ideas are accepted, points are made and other points are made against them. When kings are discussing they say something and punish anyone who disagrees with it' (Mil.28-9).

Whether kings were good or bad, they had great power, and the Buddha modified some of his teachings so as to avoid coming into conflict with them. In deference to the monarch he said that a person could not join the Saïgha until they have fulfilled any obligations they had to the king (Vin.I,39) and that Vinaya rules could be changed if the king required it (Vin.I,137). At the same time he told monks and nuns to steer clear of royal courts so as not to get involved in all their intrigues, jealousies and temptations (A.V,81).

The three kings who appear most frequently in the Tipiñaka are Pasenadi of Kosala, Bimbisàra of Magadha and his son and heir Ajàtasattu. It was about two years after his enlightenment that the Buddha first met King Pasenadi in Sàvatthi, the capital of Kosala (S.I,68). Impressed by his teaching, the king and his chief queen Mallikà soon became two of the Buddha's most dedicated disciples. Many discourses in the Tipiñaka record dialogues between the Buddha and the king and nearly all the discourses in one chapter of the Saüyutta Nikàya consists of such dialogues (S.I,68-102). Pasenadi's genuine integration of the Dhamma into his life is nowhere better illustrated than by the fact that his commitment to the Buddha's teachings did not prevent him from having respect for and being generous towards other religions (S.I,78; Ud.14). According to tradition, Pasenadi had two sons, one of whom, Brahmadatta, became a monk (Th.441-6).

Bimbisàra came to the throne at the age of 15 and ruled for 52 years. He had met Prince Siddhattha briefly while he was still a wandering ascetic (Sn.408-9), again in the year after his enlightenment and on several subsequent occasions. Bimbisàra donated one of his pleasure gardens, the Bamboo Grove, to the Buddha to be used as a monastery (Vin.I,35). Although Buddhist tradition says Bimbisàra was a devout Buddhist there is no discourse in the Tipiñaka addressed to him. Like many Indian kings, he probably supported all religions and each claimed him as one of their followers.