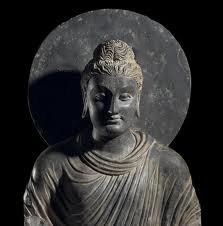 A halo (pabhà or pabhàmaõóala) is a ring of light believed to appear around the head of particularly saintly people. Ancient and modern depictions of the Buddha often show him with a halo although the Tipiñaka never mentions him having one. However, it does say at the time he attained enlightenment rays (raüsi) of blue, yellow, red, white, orange light emanated from his body (Vin.I,25). Also, in the hours before his passing his skin became extraordinarily clear and bright (D.II,134). Exactly how this type of transfiguration happens is a mystery, but it is a phenomena mentioned in cultures widely separated from each other.