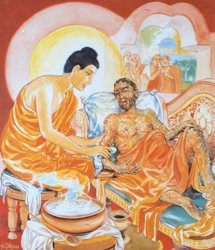 Healing is the process of becoming healthy or of restoring health. Conventional healing is done by doctors using medicine and surgery. Within the context of religion, healing is often associated with divine blessings or miracles. As with many matters, what other religions attribute to a god or gods, Buddhism puts down to the power of the mind. It has long been pointed out that mind and body are closely connected and that one can have an effect on the other. These are insights that the Buddha was aware of (S.II,114). A sense of confidence, a positive outlook and feeling that one is cared for and loved can affect the mind, which in turn can help the body heal itself. The Buddha understood this too and consequently was an effective healer. There are several incidents recorded in the Tipiñaka of sick people recovering after the Buddha or one of his disciples visited them and counseled them in a sympathetic and caring manner (A.III,295 ff; S.V,79-80; 381). The Buddha mentioned that one of the most important characteristics of a good nurse is that he or she will minister to the patient `out of love, not out of desire for gain'(A.III,144).

But more than a healer of the body, the Buddha was a healer of the mind. Once a young woman named Kisàgotamã lost her baby son and, mad with grief, she ran through the town pleading with people to give her medicine for her child. Eventually she came to the Buddha who gently told her to get white mustard seed from a house where no one had ever died. Thinking that this seed would miraculously revive her child, she went from house to house asking for one. Everyone was willing to give her the tiny seeds but when she asked if anyone in the house had ever died she was always told that they had. Slowly it dawned on Kisàgotamã that death is an inevitable part of life and her grief gave way to understanding and acceptance (Dhp-a.,273).

Both during his own time and even today, some uninformed people have thought of the Buddha as a prophet, a miracle worker or as a philosopher, whereas he saw his role as that of a physician who heals human suffering. Once, a man asked the Buddha a series of questions about the nature and extent of the universe. The Buddha told the man that he was like a person who had been shot with a poisoned arrow and when a physician who could remove it appeared, the man would first demand that certain questions be answered, e.g. the name of the person who shot the arrow, his parents' names, the type of bow used to shoot the arrow, what type of tip the arrow had, etc. The poison would have killed the man long before all these questions were answered. The Buddha then said that his role was not to answer all the metaphysical and theological questions people might ask, but to show them how to remove the arrow of suffering (M.I,429-31). See Silence, The Buddha's.

that one collection of the Buddha’s sayings were originally transmitted by a woman? Click Here