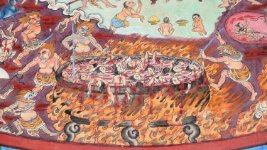 Hell is a realm or state of eternal postmortem punishment. Buddhism denies the existence of hell but does teach that there is a purgatorial state. There are several words for purgatory in Buddhism, the main ones being `loss'(apàya), `the difficult road'   (duggati), `to descend' (naraka and niraya) and `ruin' (vinipàta). The name avãci, often used in the commentaries and later Buddhist literature for purgatory, only occurs once in the suttas (It.86).

Purgatory is only one of six realms or states of existence beings can be reborn into, the others being heaven, the human realm, the animal realm, the realm of jealous spirits (asura), and the realm of hungry spirits (peta). With six possible realms to be reborn into, this means that purgatory is not the only alternative to heaven. The primary aim of Buddhism is not, however, to be reborn in heaven or indeed in any realm, but not to be reborn at all. Rebirth in the heaven or the human realms is certainly better than rebirth in purgatory, but better still is to end the process of death and rebirth, i.e. to attain nirvana. The Tipiñaka mentions many different purgatories. One list mentions Asipattavana, Gåtha, Khàrodakà Nadã, Kukkuëa and Simbalivana (M.III,185) and a longer and different list mentions Ababa, Abbuda, Ahaha, Añaña, Kumba, Nirabbuda, Paduma, Puõdarãka, Sogandhika and Uppalaka (S.I,149; A.V,173). The suttas give only very brief descriptions of the different purgatories, but the names of some of them are suggestive. For example, Gåtha means `faeces' or `filth' and Simbali is also the name of a tree with sharp thorns on its trunk and branches. Other names suggest far less unpleasantness; Paduma, Puõdarãka, Sogandhika and Uppalaka are also common names for water lilies and lotuses.

The Buddhist purgatory differs from hell in several important ways. (1) No one judges the dead and casts them into purgatory; rather, each individual creates a negative destiny for themselves by their negative thoughts and actions in this life, i.e. their kamma. (2) Purgatory is not eternal, but limited and impermanent like every state. After one's lifespan in purgatory is finished one will be reborn into another state. To the Buddhist, the idea of an endless hell raises yet more doubts about the existence of a god who is supposedly just and merciful. (3) The suffering of purgatory is not a `punishment' as in the theistic conception of hell but, as said before, the result of one's own negative actions. (4) It is not primarily one's religious beliefs but one's actions, that conditions whether or not one will be reborn in purgatory. Thus a virtuous Sikh, Jew, Taoist or atheist may well have a good rebirth, while immoral or evil people who call themselves Buddhists may be reborn in purgatory.

what the difference between equanimity and indifference is? Click Here