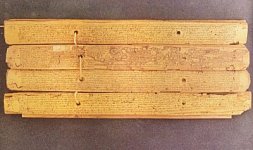 A book (gantha or potthaka) is an object made of numerous thin sheets, written or printed on, and then attached to each other by some means so that they can be read. The Jàtaka mentions a message being written on a leaf (Ja.II,174) and the first Indian books were made in perhaps the 3rd century BCE from the leaves of Corypha umbraculifera, the Talipot Palm. Records from Sri Lanka say the Tipiñaka was committed to writing in that country in about 100 BCE, although parts of it may have already been written down in India earlier. When Buddhism spread to the far north of India, books were made of birch bark (Sanskrit bhàrja), and when it got to China, silk, and later paper, were used. The first modern Buddhist books, i.e. printed on paper and bound between hard covers, were produced in Sri Lanka in 1862. Buddhists have always revered books of the Tipiñaka by putting them between golden covers, wrapping them in silk and even sometimes enshrining them in ståpas.

that after his death and cremation the Buddha’s remains were divided into eight? Click Here