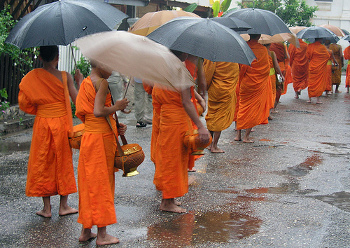 It is said to rain (vassa or vuññhi) when drops of water fall from the sky. In a mainly agricultural society as existed during the Buddha's time, rain was extremely important. This is reflected in the Buddha's observation: `Rain sustains both slack and bold, as a mother nourishes her only child. The life of all earthbound creatures is sustained by the falling of the rain'(S.I,44). Simple people believed that rain was caused by sky spirits called vitthibhuta, although gods like Sakka and Vassavalàhakadevaràja, Rain Cloud King, could also make it rain (Ja.I,330).

The Buddha spoke of different types of clouds which in some ways correspond to modern meteorological classification of cloud formations. The five types he mentioned are cool clouds (sita), warm clouds (uõha), storm or thunder clouds (abbha or thaneti), wind-blown clouds (vàta) and rain clouds (vassa, S.III,254). He observed that rain falls in at least two different ways; in large drops (thulla phusitaka) as during a monsoon downpour, and in small scattered drops (ekaü ekaü) as when it is spitting (A.I,243; S.I,104). He said that the failure of the rains could be due to such things as heat, wind or the clouds being blown out over the ocean (A.III,243).

The ancient Indians believed that widespread immorality or an unjust ruler would also disrupt rainfall, a belief the Buddha also subscribed to. The Jàtaka says:`It rains at the wrong time and doesn't rain at the right time because of the bad king'(J.II,124). A drought was considered a disaster that could lead to famine and anarchy. Some ascetics preyed on peoples' anxieties about the rains by claiming to be able to predict good or bad rainfall (D.I,11).

The ancient Indians recognized the weather as a factor in disease (Vin.I,199) and this was particularly true of the rainy season. The cool gusts, high humidity and water lying everywhere meant that fevers, skin complaints and waterborne diseases were very prevalent during that time. It was during the rainy season that the Buddha contracted the illness that eventually led to his death (D.II,99).

It usually only rains in northern India during the monsoon, which occurs between June and September. For centuries before the Buddha it was the tradition amongst the different sects of wandering ascetics to stay put during this time, simply because muddy roads, flooded rivers and sheets of water everywhere made travel difficult. The Buddha adopted this custom and it gradually developed into a firm rule amongst monks and nuns. Keeping the Rains (vassaü vasati, Vin.III,10) usually began the day before the waning moon of the month of âsaëha with a formal ceremony in which monks vowed to stay in a selected location for the next three month and the surrounding lay people promised to provide for their needs. A ceremony called Kañhina was held at the end of Keeping the Rains during which lay people gave monks new robes and things they might need for the coming nine months of wayfaring. In Theravàda countries monks still Keep the Rains and the ceremonies marking the beginning and ending of this period are important ones in the Buddhist calendar.