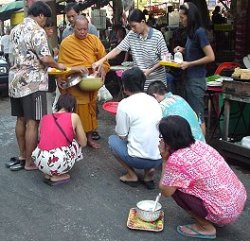 Alms gathering (piõóapàta) is the means by which Buddhist monks and nuns get their food. This practice differs from begging. A beggar asks or pleads for alms whereas Buddhist monks and nuns only present themselves at the door of a potential donor, stand quietly for a few moments and after receiving something, move on. The Mahàvastu says: `The wise monk asks for nothing, the noble ones do not hint of their needs. They just stand and let their bowl be seen. This is how the noble ones gather alms.' The bowl (patta) in which the food is received and later eaten out of, is one of the eight requisites of monks and nuns. The practice of gathering alms has almost died in Sri Lanka but is still common in Burma, Thailand and Cambodia. See Turning Over The Bowl.

that the Bodhi Tree is hardly ever mentioned in the Buddhist scriptures? Click Here