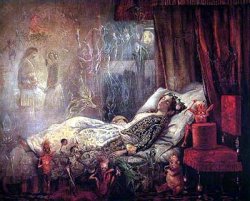 Dreams (supina) are mental images that occur during sleep. There is widespread belief that dreams have some significance. Some people believe that dreams  can foretell  future events, others that the dead or even deities can communicate with the living through them. Modern psychoanalysts say that when interpreted correctly, dreams can offer an insight into suppressed desires and drives and thus can lead to a deeper self-understanding. Buddhist psychology recognizes several types of dreams. According to the Milindapa¤ha these are (1) dreams caused by physical stress, (2) by psychological irritability, (3) by spirits, (4) because of mental clarity and (5) prophetic dreams (Mil.II,298). It also says that dreams mainly occur in the interval between falling asleep or waking up (okkante middhe) and deep sleep (asampatte bhavaïge, Mil.II,299), a fact confirmed by modern research.

Before the Buddha was enlightened, he had seven dreams full of strange symbolism which did in fact foretell his enlightenment (A.III,240ff). However, he was sceptical of those who claimed that they could interpret other people's dreams and he forbade monks and nuns from doing this (D.I,8). He said that a person who does loving-kindness meditation will not be disturbed by nightmares (A.V,342) and also that a monk who falls to sleep mindfully will not have a nocturnal emission, a physiological event usually accompanied by erotic dreams (A.III,251). The Buddha also said that dreaming of doing something, i.e. killing someone or stealing something, is not ethically significant and, therefore, has no kammic effect (Vin.III,111). Thus he understood that dreams are beyond the power of the will.

why the Buddha is often depicted with long ear lobes? Click Here