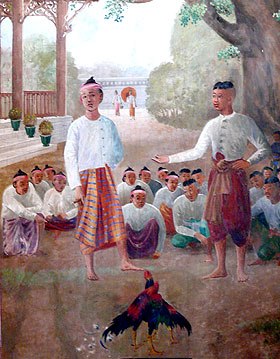 Blood sports are games or entertainments that draw animals' blood (lohita), either by injuring or killing them. They can involve animals of the same or different species either fighting each other or fighting a human being or being hunted. Cockfighting, bearbaiting, fox hunting and falconry would be examples of the first of these, while bull fighting would be an example of the second. The enjoyment of blood sports is derived partly from gambling on the combatants and partly from testing one's skill or courage against the animal. For some people at least, a perverse glee in inflicting or watching pain being inflicted may also be part of the attraction of these activities.

Some of the blood sports popular during the Buddha's time and mentioned in the Tipiñaka included elephant, buffalo, bull, ram, cock and quail fights. Fighting quails may sound rather curious but male quails are very pugnacious birds and fight furiously when they encounter each other. It seems likely that at least some of these fights did not involve the animals being killed. For ordinary people, the most common blood sport was cockfighting (kukkua yuddha) which seems to have been a feature of fairs and village gatherings. In their natural state cocks will fight but not kill each other. Only when sharp metal spikes are attached to their spurs does this happen. This does not appear to have been done in ancient India.

The Buddha said that monks and nuns should not watch animal fights because they were considered a vulgar entertainment and because they involved cruelty (D.I,6). For monastics and lay people, participation in blood sports would be against the first Precept which requires that we have `care, kindness and compassion to all living beings' (D.I,4) There is no tradition of blood sports in Sri Lanka, Tibet, Korea or amongst Chinese Buddhists either, probably because of the influence of Buddhism. Cockfighting ending in death is popular in Burma, Cambodia and Thailand.

that meditation may have some influence on the complexion? Click Here