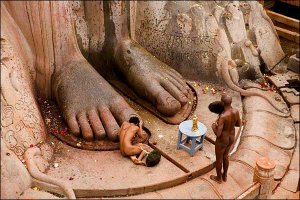 Jainism is a religion founded by the sage Pàr÷va in about the 7th century BCE. Some 20 years before the Buddha's enlightenment another sage claimed to have become enlightened and revitalized Pàr÷va's teachings and reformed Jain monastic discipline. This individual was named Nàyaputta, Nàtaputta in the Buddhist text, and is known to history as Mahàvãra (Great Hero). It seems that the monks who continued to adhere to Pàr÷va's discipline wore a single garment while Mahàvira's disciples went naked. The first Buddhists were familiar with the Jains and referred to them as the Niganthas, the Bondless Ones (D.I,57). One of the central practices of Jain monks was called the Fourfold Restraint (S.I,66) and the Tipiñaka reports that Mahàvãra claimed to be omniscient (M.II,31), a claim mentioned in Jain scriptures. Mahàvãra also taught that any act, intentional or not, creates kamma, whereas the Buddha asserted that only intentional actions have a kammic effect. From this difference between the two religions several others follow.

While the Buddha often discussed or debated with Mahāvīra's disciples he and Mahàvãra never met face to face. Although Jainism and Buddhism were rivals and the Tipiñaka dismisses the Jains as `argumentative' (Sn.381), the two religions have much in common. It is clear that the Buddha was influenced to some degree by this gentle, ascetic faith. Despite this the Buddha was also critical of some Jain doctrines and particularly the self-mortification practiced by Jain ascetics.

Despite disagreements over these and other philosophical questions, Jainism like Buddhism, has always been a tolerant faith. A popular Jain work, the Nàladiyà, says: `Cows are of different shapes and colors but the milk they give is always white. Religious sects are many and various but they all teach the life of virtue.' For several centuries the two religions vied with each other for supremacy but eventually Buddhism became dominant and Jainism ever after remained a minority religion. Today there are about 3 million Jains in India, mainly in the western state of Gujarat. There are also now small but vibrant communities of Jains in the UK. See Nudity and Sects.

what the Buddha thought about the spiritual value of sex? Click Here