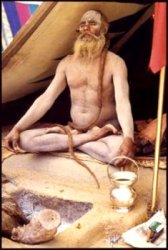 Nudity or nakedness (naggiya) is the state of being without clothes. Throughout history people have gone naked or nearly naked. Hunter-gatherer peoples in tropical regions have often been naked for practical reasons. Nudity has been practised as a protest, as a punishment and even as something that promotes good health. In ancient India nudity was mainly practised for religious reasons. The Buddha mentioned that before his enlightenment he went naked which have led some to speculate that he was a follower of Jainism for at least some time (M.I,77). The âjãvakas and several other sects went naked and the Ekasàñaka ascetics only wore a small cloth over their genitals. Nakedness together with tearing the hair out, never cutting the hair and nails, allowing the hair become matted and never washing, were all believed to show an admirable detachment from the world. The supposed spiritual value of nudity was summed up by the monk who said: `Nudity is useful for desiring little, for contentment, for expunging evil, for scrupulousness, for carefulness, for lessening obstructions and for arousing energy.' (Vin.I,305). Twice a month the lay disciples of the âjãvaka sect would go naked and sleep on the ground in imitation of their clergy, the idea being: `I have nothing anywhere and, therefore, for me there is no attachment to anything'(A.I,206). As these lay people really gave up nothing and resumed their ordinary lives the next day, the Buddha considered that their `renunciation' was nothing more than a bluff.

The Buddha made it a rule that monks should never go naked, even within their private quarters (Vin.II,121). He said: `Nakedness is unbecoming, unsuitable, improper, unworthy of an ascetic, not allowable and not to be done'(Vin.I,305). He objected to it on two grounds. The first was because like all austerities or surface changes, nudity does not lead to significant inner change. He said: `Not nakedness nor matted hair, not mud nor fasting, not lying on the ground, being unwashed or squatting on the heels will purify one who has not passed beyond doubt' (Dhp.141). He also objected to nudity because it contravened the norms of polite society for no good reason. Lady Visàkhà once saw some nuns bathing naked and commented: `Nakedness in women is ugly, abhorrent and objectionable'(Vin.I,293), which seems to have been the general opinion at that time. The Buddha wanted his monks and nuns to abide by the normal standards of decorum and good manners, the better to be able to communicate the Dhamma to others. He was also anxious that his monks and nuns should be distinct from those of other sects, inwardly but also outwardly. Because many of these other ascetics were either completely or partly naked or wore whatever they liked, the Buddha stipulated that his ordained disciples should wear a distinct and easily identifiable robe.

Today Jain monks and nuns and several sects of Hindu ascetics still practise nudity, the most well-known being the Naga Babas and the Aviduts. See Clothes.

that technically Buddhists monks do not ‘beg’ for alms? Click Here