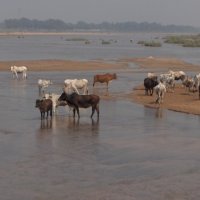 A river (gaïgà, nadã or savantã) is a natural flow of water continuing in a long course across a landscape to another body of water; either another river, a lake or the ocean. After the Himalayas, the most noticeable natural feature of the Middle Land, that part of India where the Buddha lived, was the rivers. They were also the most important; as a means of transport, a provider of food and a source of water for irrigating crops. Some of the rivers that flow through the Middle Land Ý the Ganges and Yamnuà, the Rapti, Gandak and Ghaghara (A.V,22) are extremely wide. The Son River at Dehri where the Buddha would have crossed on his way to and from Sàrnàth, is nearly four kilometers wide. When he and the monks and nuns who were accompanying him on his journey arrived at a river, they would often have to look for a boat or other craft or try to make a raft out of reeds and branches in order to get across (D.II,89). So for the Buddha, who spent much of his life traversing the country, rivers were, more than anything else, a challenging obstacle. It is not surprising, therefore, that he often used rivers and many things associated with them as metaphors for the spiritual quest and its goal.

He called the ordinary worldly state `this bank' (ora) and nirvana `the further bank' (pàra). He named the first stage of enlightenment `entering the stream' (sotàpatti), which would be a preliminary to swimming across a river. To him, attitudinal and emotional negativities like greed, hatred and desire were `torrents' or `floods' (ogha) that could sweep one away. He said of a monk who studied the Dhamma diligently that he is `one who knows a ford' (titthaü jànàti, M.I,221). The cowherd Nanda assured the Buddha of his determination and ability to be a good monk by saying: `Lord, I will not get stuck on this bank nor will I get stranded on the far bank. I shall not sink in midstream and I shall not run aground on a sandbar. May the Lord accept me as a monk' (S.IV,181). In one of his most famous similes the Buddha likened his teachings to an improvised raft, which, after it had been used, could be abandoned; the idea being that even something as precious as the freedom-giving Dhamma should not be clung to (M.I,134).

Every time wayfaring monks or nuns found their path blocked by a great river sliding silently along, or a simple cowherd like Nanda took his animals down to a river to drink, they would have been reminded of some aspect of the Buddha's teaching. See Bridges.