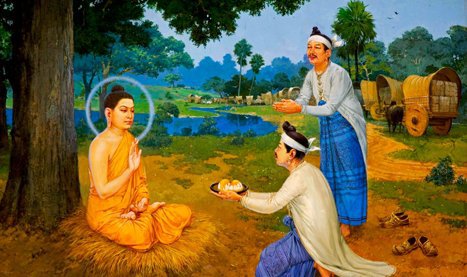 In the Mahàvacchagotta Sutta the Buddha mentioned that he had many thousands of disciples, a good number of whom had attained one or another of the stages leading to enlightenment (M.I,490-1). However, the Buddha's first disciples were the merchants Tapussa and Bhallika. During the Buddha's fourth week at Uruvelà, Tapussa and Bhallika happened to pass the outskirts of the village and saw him quietly meditating there. Impressed his serene looks and the aura of peace around him they approached him with an offering of barley gruel and honey balls.  When the Buddha had finished eating the two men asked if they could take refuge in him and his Dhamma. They did not take the third refuge  because the Saïgha had not yet been established (Vin.I,4). The Tipiñaka contains very little other information about these two individuals. In the Aïguttara Nikàya the Buddha describes  them as  `the first person to take Refuge'  (A.I,26), and in the Theragàthà there is a verse by a Bhallika, although it is not certain if this is the same Bhallika as the one who met the Buddha at Uruvela (Th.7).

Perhaps because of the dearth of information about them, many legends grew around the first two disciples. When the Chinese pilgrim Xuanzang was in northern Afghanistan in the 7th century he visited two towns, each named after the merchants and each claiming to be their hometowns. Just outside each town was a ståpa supposedly enshrining relics given to Tapussa and Bhallika by the Buddha. The ancient Sri Lankans claimed Tapussa and Bhallika as their own. At Tiriyaya on the north-east coast of Sri Lanka, is a beautiful ancient ståpa supposedly built by the two merchants to enshrine a hair given to them by the Buddha.  The Burmese insist that Tapussa and Bhallika were from their country. The great golden Shwedagon Pagoda in Rangoon contains, Burmese legend says, eight hairs that the Buddha gave the two merchants. Records of the Shwedagon Pagoda only go back to the 10th century and so this legend is a late one.

However, the Vinaya says that the two merchants came from Ukkalā which most historians identify as being somewhere in Orissa. Archaeology would appear to confirm this. Two inscriptions from Orissa, both in Brahmi script and both dating from about the 1st century BCE, mention gifts made donations made by Tapussa and Bhallika. The first of these was found in a ståpa and the second is located in a cave nearby a huge ståpa. See Subhadda and Sujātā.

Tapassa and Bhallika of Orissa: Their History and Nativity, by G. Mohanty et al. Orissa Review 2007.

that technically Buddhists monks do not ‘beg’ for alms? Click Here